For those of you that know me , you know that I was an exact match for a kidney for my mother who needs a transplant. We were excited that I had been deemed a match. Upon further testing the doctors found that I had tumors on my liver. Three benign tumors to be exact.

Here I am right before the surgery , totally unsuspecting! duh!! 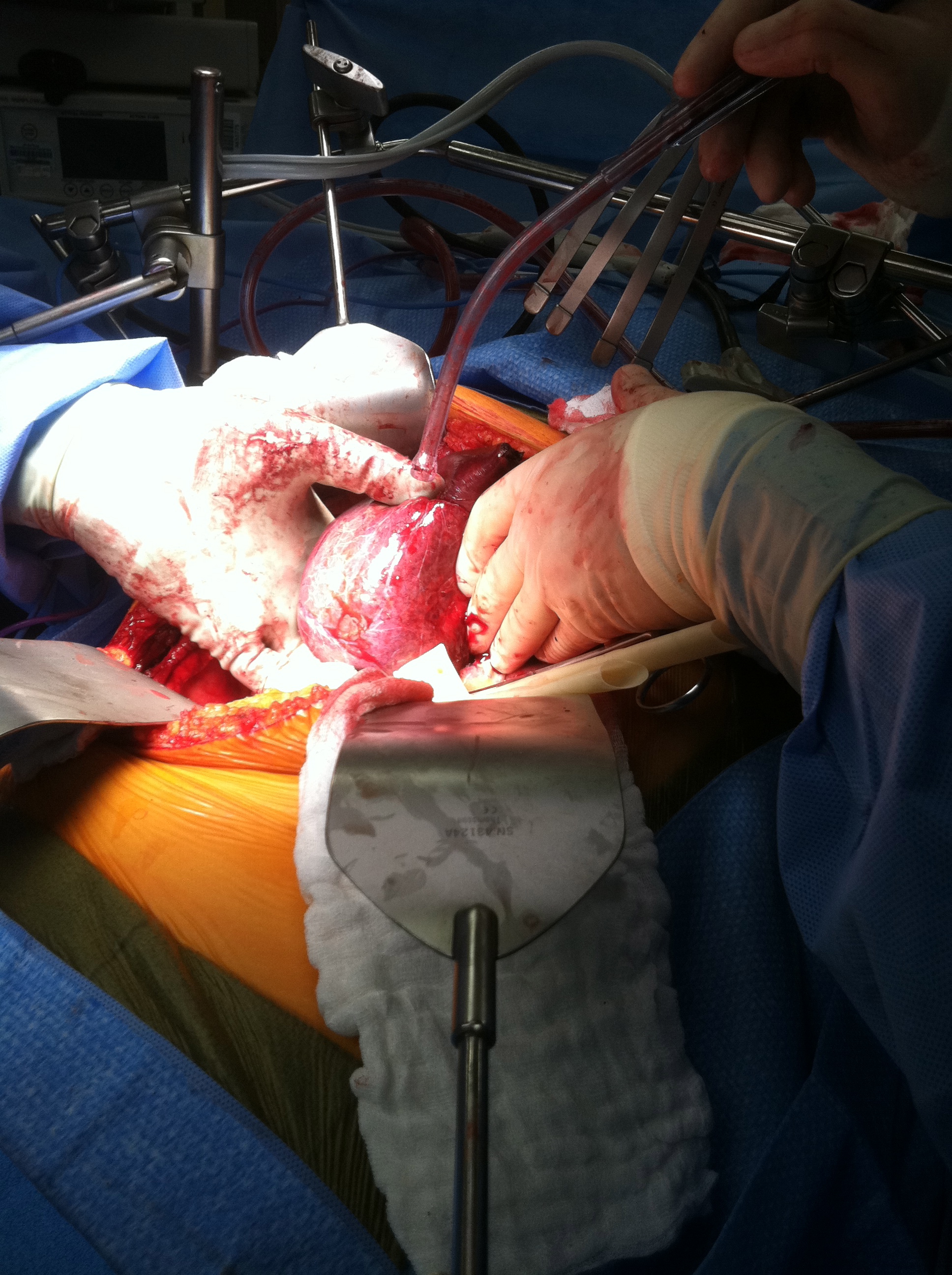 Here is the actual tumor they removed. Photo taken by my surgeon Dr. Jon Hundley. 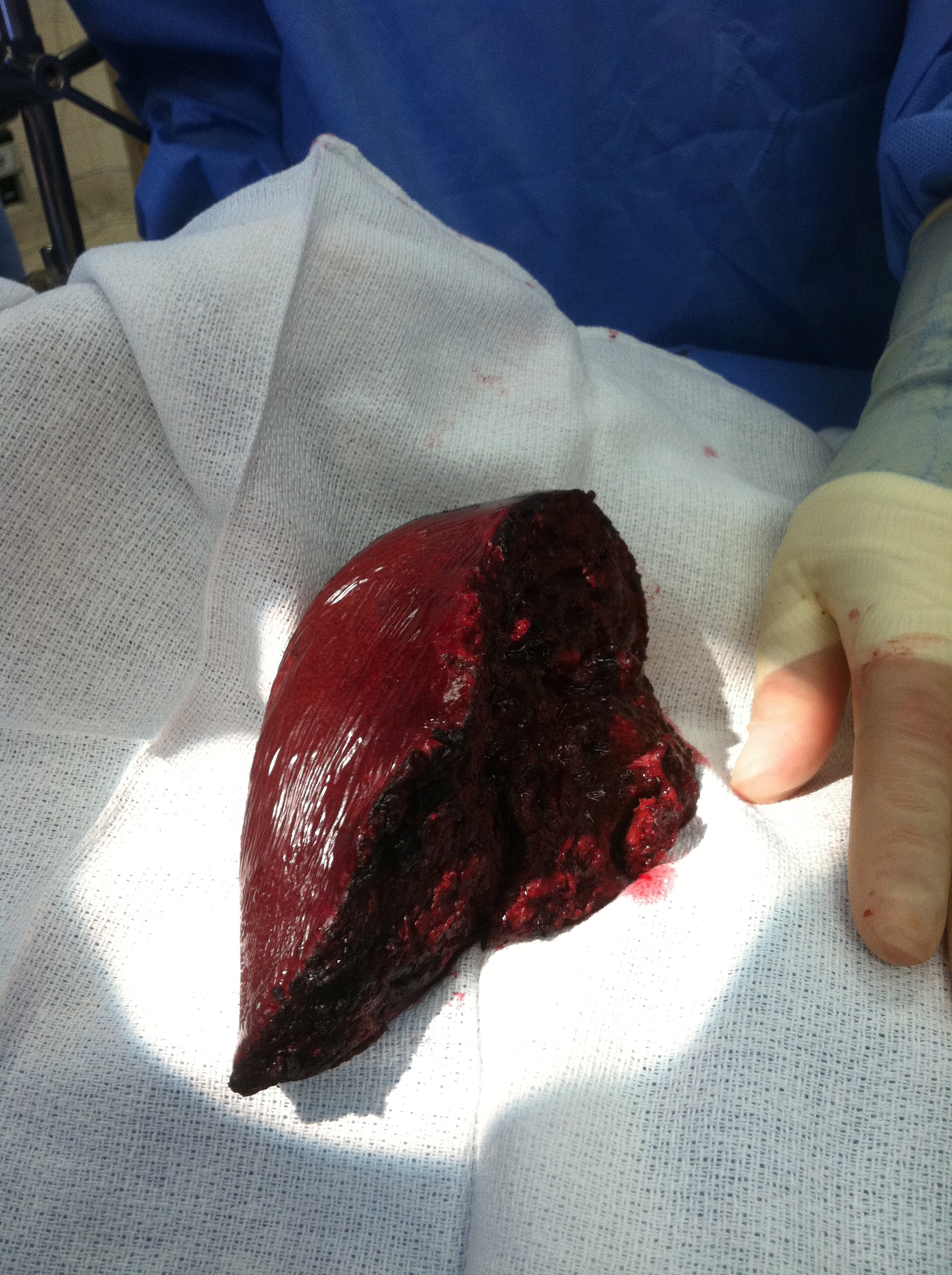 This is the 30 percent of my liver that they removed. 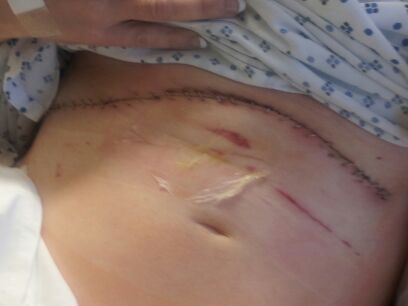 My beautiful 21 inch incision ,32 staples. The liver transplant team removed 3 tumors, 30 percent of my liver and my gallbladder. 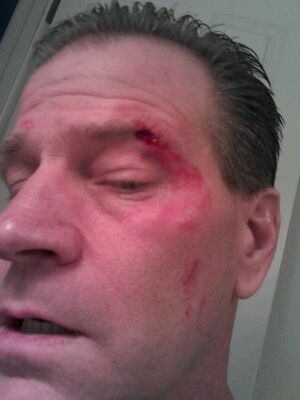 This is a picture of Rick after I had sent him home from the hospital where he had been sleeping in an upright 1950’s style chair for 5 nights. He was physically and emotionally exhausted and desperately needed rest. I was like “why is this happening?” I immediately texted our family physcian friend and asked him if he could come to the hospital and stitch him up. I was total mess. He said he went home and was folding some clothes and ran into the wall and knocked himself out cold. 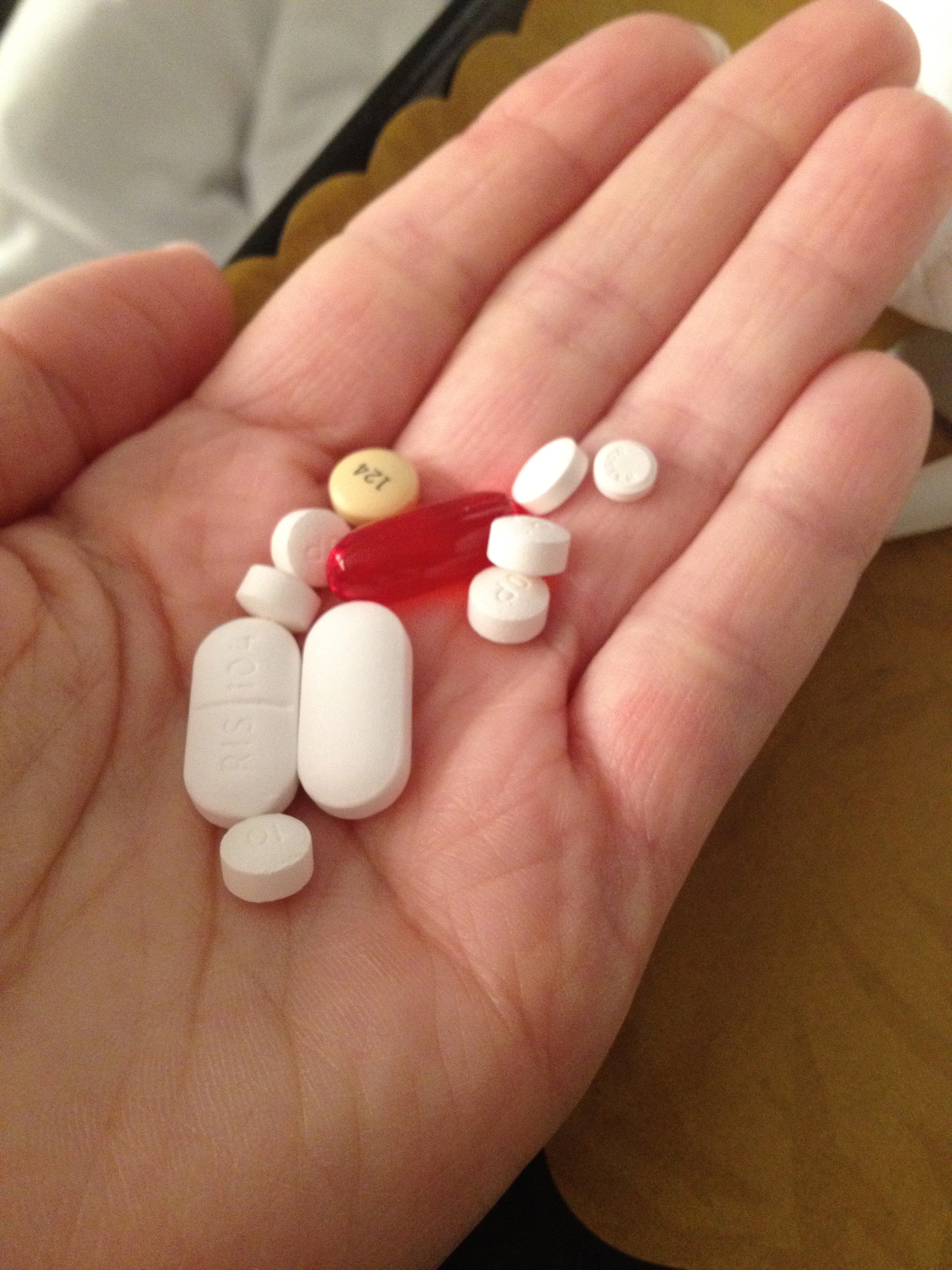 This is what my daily pill regimen consisted off. While I was at the hospital they had me on Oxycotin, oxycodone, dilaudid, and a morphine drip. Unfortunately, I was suffering from a series of muscle spasms that were absolutely the most brutal pain I had ever felt in my life! It felt like there was a pack of firecrackers going off inside my stomach and there was nothing I could do about it. If it had not been for my husband standing by my side and praying with me and comforting me I seriously would have made my way over to the 7th floor story window and ended it right there. It was that bad and I simply could not see a light at the end of the tunnel . I suffered through spasms for 9 days, each time screaming out in agony. The reason they couldn’t stop the pain was that if they had given me more and more meds they would have had to intubate me. My blood pressure was dangerously low, 60/40 so I had to stay on the recommended dosages that did little to alleviate the pain. I remember having Rick call Jon Weece from Southland Christian Church and having him pray to God that very moment that the pain would go away. I also screamed for him to call the priest and have him pray also!  Even though we aren’t Catholic ,I just needed relief and I needed it that very second! This was the greatest battle I had ever faced. I am so thankful that I had a strong support system to get me through this.

I was at UK hospital for 12 long days and once they discharged me I went to my mothers house to recover. We figured it would be easier there because she had a hospital bed and I was not able to lie flat due to the incision. I stayed there for about a week. I was still on the oxycotin and was living in a fog. The week at the hospital was pretty much a blur. Each day at my mom’s I actually seemed to be getting worse. It felt like someone had taken a mallet and hit the incision . 3 days after I was discharged I could hardly walk. It was determined that I had an abscess. Oh Joy! So off we went -back to UK Hospital . It was there that my doctor lanced it and put me on an antibiotic. The abscess was about the size of a golf ball. He assured me that I would start feeling better almost immediately. Well, kinda, sorta, not!

The next day after I had been on the Penicillin, my feet and calves started to ache like I had run a hundred marathons. I grew fearful that I had deep vein thrombosis ,because i had been sedentary for nearly 3 and a half weeks. This onset of pain started at about midnight so I called the Doctor on call and told him my symptoms. He suggested I come back to the hospital first thing the next morning. So not only did I still feel awful from the surgery I now had excrutiating pain in my feet and calves. “What in the world was happening to me?” I thought? Finally dawn came and I still felt awful. I now had uncontrollable nausea and every time I dry heaved it felt like my whole insicion was coming unglued. I was as miserable as I had ever been… I thought “Please God make this end” When we got to the hospital, the whole time I was dry heaving uncontrollably, so it was slightly embarassing to sit in the waiting room . Thankfully, they got me right in and quickly diagnosed that I was suffering from an allergic reaction to the penecillin. They ultrasound tested my legs for deep vein thrombosis just to make sure, fortunately it was negative. The allergic reaction to the penecillin is what caused the pains in my legs and the vomitting. Once I stopped that medicine the symptoms came to a hault.

So for the week or so after I left the hospital to “recover” I had been struggling just to put one foot in front of the other. I hadn’t even begun my true recovery phase yet,due to my setbacks. I felt that finally the healing could begin now. I was still taking Oxycotin and other meds and absolutely hated it. I felt like I had a sweater encasing my brain and was so numb. I continued on with the oxycontin for about a week and then decided to go cold turkey….. BIG mistake! One is suppossed to taper off that drug so as to avoid physical withdrawal symptoms. Well, my body went through the full range of withdrawal from hot flashes, to shakes, to depression, to dizziness, to nausea and sleeplessness. It was perfectly horrible and I don’t ever want to take that drug again! It took me 4 days to get through the physical symptoms of Oxycontin withdrawal. Now I am just taking 600 mg of Ibuprofen and it seems to do the trick. As I write this , it is February 5th and my days are spent sitting in the lazy boy recliner with a heating pad. My doctor had told me that it was a 6 to 8 week recovery and I never dreamt it would actually take that long for me. Heretofore, with every other surgery I had had my recovery was only about a week to 2 weeks max. I thought in my mind that I would be “off” about 2 weeks and that I would force myself to take the month of January off. Ha! was I wrong!? Just getting up to take a daily shower is exhausting, but I can tell each day that passes I do get stronger and stronger. I finally have my appetite back so I can work on gaining some of the 15 pounds back  I have lost.

I still get disappointed that I can’t donate my kidney to my mother. But, thanks to the article I wrote in Ace Magazine we have had 2 total strangers come forward and offer to donate to her! These were just people that had made a life decision to become an organ donor and read the article and realized that there was someone here locally in need. We were truly touched and are praying that one of them will be a match for my mother. In the meantime, she starts dialysis next week . She has had some complications with the port they put in so we are hopeful they can get those worked out and she can start getting the dialysis she needs in order for her kidneys to function.

In closing, my family and I have been overwhelmed by the out pouring of love and compassion the people of this community and beyond have shown us. It truly has been a life changing experience. We have had dinners brought to us nightly and I can not begin to tell you how nice it is not to have to worry about cooking for the kids. Thank you and everyone from the bottom of my heart!

HOW MUCH IS YOUR HOME WORTH?
FREE Home Value
FREE Download:
New Home Buyers Guide
Download
Have Questions?

Let's Talk!
SCHEDULE A CALL
You may also be interested in...
1129 Turkey Foot Road Unit 6 Lexington KY 40502 – SOLD!!
Link Fantastic location in 40502 conveniently located off Alumni Drive with easy access to the University of Kentucky and Chevy...
3903 Wentworth Place Lexington KY 40515
Beautiful upscale townhouse in Ellerslie at Delong. 9 ft and volume ceilings, crown molding and an open floor plan with...
5065 Ivybridge Drive Lexington KY 40515
Highly sought after Hartland Gardens! As soon as you step into the wide open foyer, you will feel right at...